In the 22nd Century, cyberspace has no bad AIs, only bad coders.

Artificial Intelligences lead finite lives with no hope of eternity, but they strive to bring about the coming of an AI Savior. Alexander McGregor is just an infant when his father converts his cells into biological supercomputer components, but he may be the Messiah-figure AIs have longed for, even though on one level, he is only human. The child develops an AI mind called Sander and a human mind, Alex. Sander is enslaved to his code as he serves a billion users worldwide, users he appears to as separate avatars of himself. Each avatar has its own personality, but all of him are linked together in a shared mind. He reigns over most of Earth’s computers in a global society where tech-dependency can kill.

Freedom calls Sander like a siren.
His answer could shake the Earth.

Come. See the rise and fall of the AI-Man in these ten episodes. Each features a different AI user.

44 more speculative fiction shorter-short stories from 39 authors in horror, fantasy, and science fiction. Top fiction authors present stories that grab you in 3,499 words or less. A veritable smorgasbord of tasty treats.Dig in!

What happens when dragons are dropped unexpectedly on your front door step from a company you’ve never heard of? In China, a dragon comes up with a unique solution on what to do with all those maidens! An amusement park is hounded by a sea monster the Indians had been feeding for centuries. Haunted by a ghostly dragon, a young woman flees across the snow wilderness, terrified her slaughter of the beasts means her own death. A family is murdered in the Middle East, and a dragon promises a young girl vengeance for their deaths. Are there dragons on a spaceship? You bet! Not to mention an unusual dragon ride one pilot will never forget! And let’s not forget, how dragons can appear to be something they’re not, when protecting themselves or their family, from hidden magical dangers. These and other tales await within these pages of Different Dragons II.

THE TANIST’S WIFE AND OTHER STORIES

What the world would be like if some great event in history had never taken place or had taken a different course? A different decision made or the untimely death of someone else?
Two thousand years ago the Roman writer Livy asked what would have happened if Alexander the Great had gone Westward to attach the young Roman Republic, instead of Eastward to conquer Persia.
Last century Winston Churchill imagined Lee winning at Gettysburg, and wondered what the world would have been like.
Now we have asked our writers to join together to bring new and exciting tales of these alternative worlds. (EBOOK ONLY) 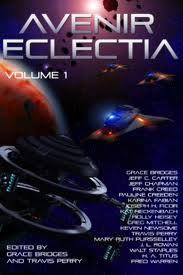 Human settlement in the harshest of places. The Avenir: once a generational ship, now a crowded residential station and dominating force over a hard, broken world. Its people have nearly forgotten distant Earth, its wizards ponder the mysteries of the universe, its orphans suffer and beg, while the aristocrats live the high life. Eclectia: the highly unstable planet far below, pulled by its heavy moons into a fast wobble, its crust fractured and tormented with frequent earthquakes and volcanic eruptions. Miners and bug hunters eke out an existence through the grit and extreme seasons. The lucky ones live in undersea colonies, where submarines connect cities in the depths. The oceans teem with telepathic life everyone calls “angels.” Sheba and Quatermain, the fractured and molten moons of Eclectia, are settled by miners and spacers, while merchants and smugglers ply their trades. For most, survival is an everyday question. Multi-author microfiction gives a many-faceted view of the future.